Flooded rivers are a theme throughout Norway this summer, but it doesn’t mean that you should grab your fishing rod and get out!

Flooded rivers are a theme throughout Norway this summer, but it doesn’t mean that you should grab your fishing rod and get out!

Trond Andersson has turned worm fishing for trout into an art form. The Hallingdal local of course has his waders on, and there is a lot of water in Holselva these days. But how does he go about fishing with the current conditions?

-I fish no different now than I usually do. I might use a splitshot for that bit of extra weight to get down to the fish. Trout often hold at the bottom when the current is strong. They move around less, and often hold around structure, like rocks or logs on the river bottom.

The advantage with worm fishing is that it really isn’t weather dependent. The fish are always there, even if you can’t see them. Any self-respecting trout will usually chomp on a worm that comes floating along past them.

– Worms are probably a trout’s favorite thing in the world, even though they really aren’t native to the water.

Active worm fishing imitates a worms final struggle when drowning. In order to imitate this you really need to keep your body and gear moving, explains Trond Andersson.

His favorite river, Holselva, has a zone which is designated for fly fishing and active worm fishing only.

The latter form was developed after many rivers began with a maximum size limit and or catch and release regulations.

-Active worm fishing allows you to feel the fish take, and the hook is set before they swallow the worm. This method can in many ways be compared to fly fishing, because it works best when using lighter tackle, thin lines, and pinched barbs.

This method of fishing is extremely effective: Andersson has caught a 4.6 kilo trout with this method in Holselva and catches many fish over 2 kilo each summer.

Holselva is flowing 50-60 cm over normal levels, and the water is cold. There is still an enormous amount of snow in Hardangervidda, and we may still see a large flooding event this summer, says Andersson.

– The river decides how I am going to fish. Dirty water isn’t ideal for sport fishing, but the fish are very hungry and easy to catch.

In water with low visibility the fish can’t see as well, and it is an advantage to use bait with scent.

-The fish typically attack the worm quickly, and they don’t get scared of the splitshot, which they otherwise could see. The trout aren’t hindered by the cold meltwater, and I was pleasantly surprised the other day when I caught a fat silver trout weighing 1.5 kilo in the beginning of June!

Holselva is a spawning river, and it typically fishes best in august and September, but according to Andersson there is good fishing to be had during the Siphlonurus hatch, which typically begins in a couple of weeks.

Andersson has fished Holselva for more than 30 years, and has never seen so many big fish as in recent years. Establishing the zone with active worm fishing and fly fishing only has worked very well, and led to a noticeable growth in the population of big fish. Even though the majority of anglers here swear to the fly, there are more and more taking note of the effectiveness of active worm fishing.

– Just get out and fish, they will bite, explains Andersson, who has the following advice:

Use a deep action rod, and a thin strong monofilament line from 0.12 to 0.16 mm. Braided lines should be avoided, because they can be easily damaged with a splitshot. Use the same type of hooks as you would for dry flies, and start with a medium sized worm on a size 12 hook.

-If the trout aren’t committing to the take then go down a size, both with the hook and the worm. It is very seldom that using multiple worms on the hook works better than using just one. 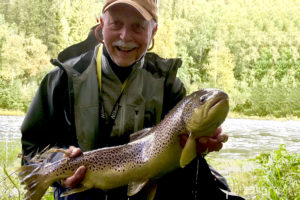 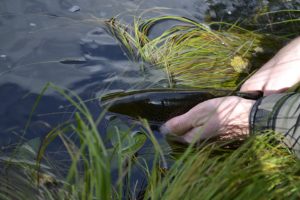 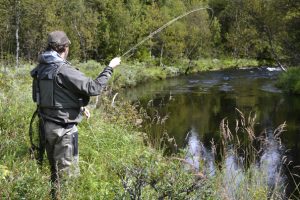