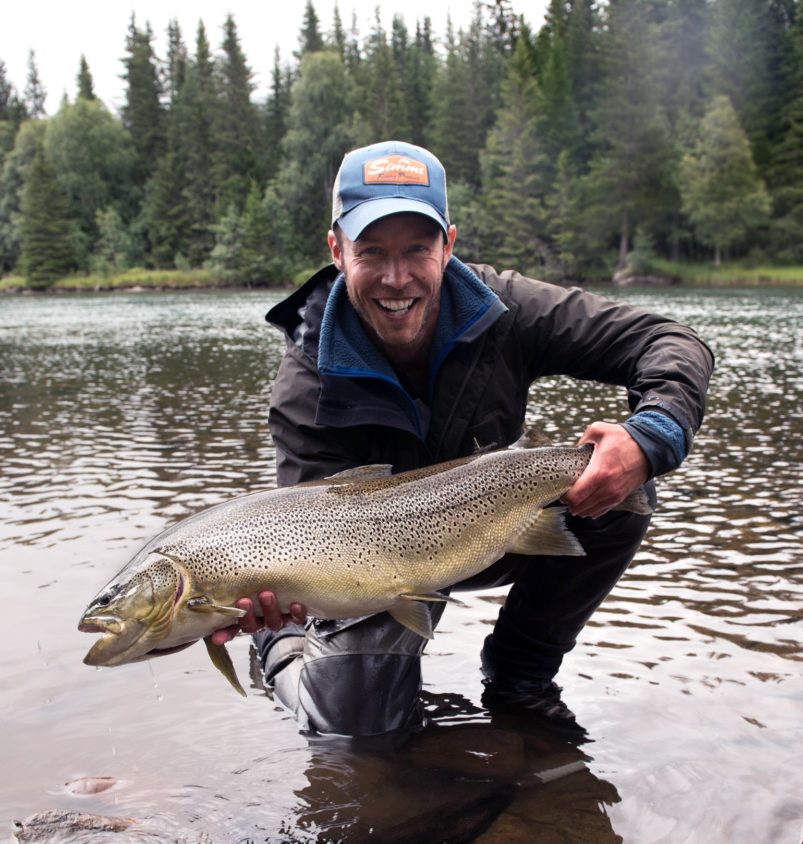 Holselva is a beautiful trout stream offering excellent fishing for both fly fishermen and active worm fishermen, with a very healthy population of large lake run trout. They run upstream typically under higher water from Strandafjorden, which is a large shallow nutrition rich lake in which the trout grow quickly.

Holselva is a beautiful trout stream offering excellent fishing for both fly fishermen and active worm fishermen, with a very healthy population of large lake run trout. They run upstream typically under higher water from Strandafjorden, which is a large shallow nutrition rich lake in which the trout grow quickly.

The chance for coming in contact with a large trout is better here in Holselva than most other rivers in Norway. The fishing typically picks up during mid July, and gets only better towards the end of the season.

The river is hydroelectrically regulated, and is roughly 3,5 km long, and although relatively short consists of many good holes. The water levels here can vary widely throughout the season. The vegetation along the river consists mostly of birch and pine, with small portions of agricultural land.

In the zone only fly-fishing or fishing with actively drifting worms are allowed.  There are large mayfly hatches here, and we recommend stalking fish and watching for rises. Cast upstream with your dry fly. Long leaders are recommended, as the larger lake run fish can be very shy.

In Holselva only fly fishing and active worm fishing is allowed. There are only 8 licenses available per day.

Runs and pools throughout Holselva

Støbakkjin : A classic big fish pool, and a favorite among the locals. Historically it was primarily fished with worms and lures, but now only flies and and actively drifting worms is allowed. It can be fished from both sides of the river, but just pay attention to the sign marking the border to the fishing zone in Holselva. Fishing below this sign is not allowed.

Breieslåtta: At an early time this was once the Breie family hayfield. Breieslåtta is a longer stretch of river with several pools and runs which stretches from the Øyne bridge up to the Sveinhaug Bridge. It consists primarily of slow moving water, so it is ideal for dry fly fishing. In the swifter sections nymphing or drifting worms is recommended. It can be fished from both sides of the river, but for the most part it is better fished from the road side. This part of the river is known for its excellent mayfly hatches.

Sveinhaug:Similar to Breieslåtta, Sveinhaug is a longer stretch with several pools. Offering classic dry fly water, it stretches from the Sveinhaug bridge up to Drivahølen. This stretch can also be good for drifting worms, but only under slightly higher than normal water flows. There have been many people here who have set personal size records with big trout!

Drivahølen: This pool is named after the creek that runs into the west side of the river from the Teige pool. It is a superb dry fly pool that is best fished from the west bank. Please keep in mind that the water in some spots here is much deeper than it looks. There are two runs that come from Teigehølen, and both of these runs are ideal. Great for spotting steadily rising trout. The run on the western side is recommended for those wanting to drift worms.

Teigehølen: In the 1950’s a Frenchman rented this pool from Ola Slettemoen, the father of Leif Slettemon who owns the Vestvoll farm on the west bank of the river. After this, several locals started to call this pool the Frenchman’s Hole. However, the original name Teigehølen is correct. The Frenchman took many large fish here in Teigehølen, and there are many large fish caught here every year. The conditions in Holselva have been improving due to responsible management of the river, and the fishing has likely never been better than it is now. In Teigehølen you may fish with any of the allowed methods, because it is equally suited for drifting worms or for fly fishing. For fly fishermen it is best for to go downstream from the inlet of the pool. The stretch from Teigehølen upwards to Mo bridge is unnamed, but can often give good results if you are after big fish. The same goes for Mofossen up to Kaparhølen.

Kaparhølen: It was in the depths of this pool that the Sangemannen the Troll (local legend) hid all 12 of his copper pots. So, be careful if you see something glimmering in the water here! On the road side of the river you will also find Kaparsteinen, which is a large rock just a few meters from the road. This was the stone that the Sangemannen threw at the old church in Hol. He didn’t like the harsh ringing of the church bells. Kaparhølen is a good pool, especially for drifting worms. From the opposite side it is ideal for fishing, but the thick vegetation makes it difficult to cast fly line in the upper stretches of the pool. Down towards the tail of the pool it gets a bit easier to fly fish.

Ankerhushølen: This pool gets its name from a roadside restaurant located here in the old days. A beautiful place to start the hunt for big trout, either with a fly or a drifted worm. You just have to fish this pool if you are going to fish Holselva. The long stretch of swifter water up towards Sandermohølen is especially good for drifting worms, and great when the fish are running upstream.

Sandermohølen: This pool was nameless up until 2010. Local legend tells of Scotsman who settled here long ago. He was called Sanderson, and the place he lived was called Sandermoen. Therefore, naming this pool was relatively simple. This pool is long and relatively shallow, and delivers large fish consistently throughout it’s entire length. The many large rocks in the river make excellent holding spots for trout. This makes it quite easy to read the water and either use a fly or drift a worm in front of a holding trout. The challenge here is that once the fish takes, they like to treat the scattered rocks in the pool like a slalom course!