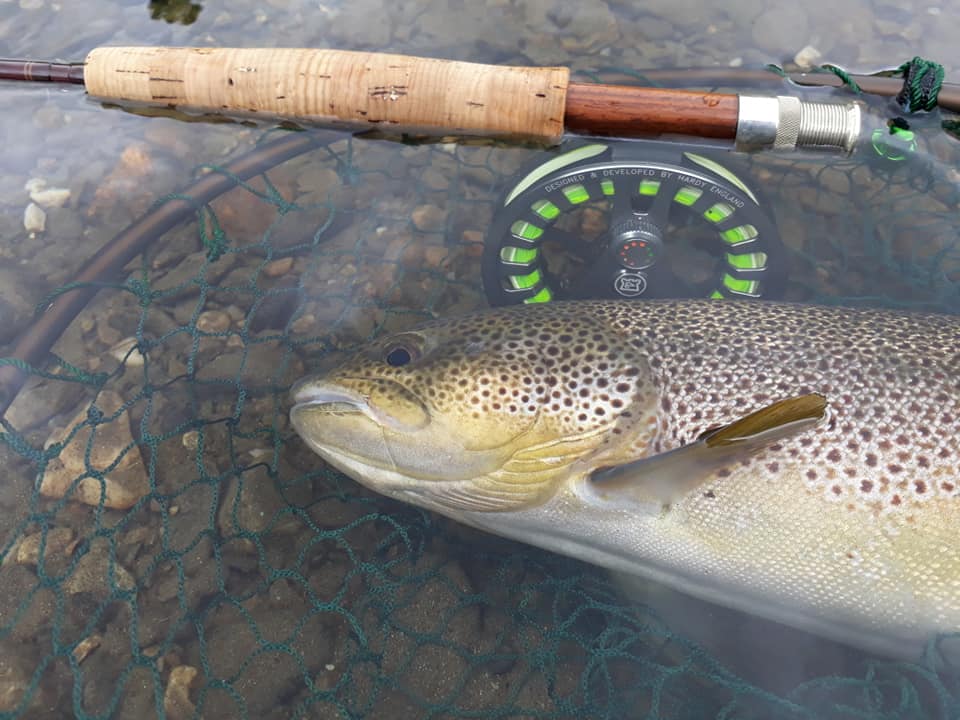 In “Tight with Fishspot” this week we can finally say that the fishing is heating up! Here are some updates from various areas in Fishspot Land.   The fishing in Rena has […]

In “Tight with Fishspot” this week we can finally say that the fishing is heating up! Here are some updates from various areas in Fishspot Land.

The fishing in Rena has been fairly slow during week 26, but there have been a few highlights. André Brun reported success with nymphing, so there is apparently plenty of insect activity on the bottom. This is very promising looking forward to next week, which should mark the beginning of Renas’ renowned mayfly hatches.

There were also others around a kilo. Photo: Andrè Brun.

Rolf Tollefsen has also visited Rena during the past week, and has weighed in on the conditions:

“There were a few fish feeding on the surface, but it was tough to find the good hatches. However, the evening fishing was on fire! A good deal of wind also made things difficult last week. Rena is finally approaching “summer flows” but can vary a good deal due to rain and regulation. The water tempuratures has varied from 5-9 degrees throughout different stretches of river, but now it looks like it has stabilized at around 7-8 degrees.

If you are willing to move around you will find rising fish. Not to mention an enormous amount of mosquitoes and gnats if the weather is right, so remember bug spray and mosquito nets!”

When the mosquitoes are too intense it can help with a bit of creativity. Photo: Rolf Tollefsen.

“There have been a lot of fish caught on Rena during the past week (several weighing 2 – 2.5 kilos). If the weather is with us in the days ahead than Rena is going to be really good fishing this summer! ”

In Rendalen over the weekend they held their annual fishing contest “Fiskefesten” on lake Storsjøen and the river Mistra. Many fishing competitions have been criticized because the focus is on catching and keeping as many fish as possible, damaging the fish population. But this is an issue that Fiskefesten in Rendalen has handled in a very positive way.

The contest is now based on catch and release. The background to this change is that people are beginning to think differently, and responsible management of fishing areas and resources has consistently proven to give results. The fish just keep getting bigger and bigger in Storsjøen, largely due to an increase in catch and release fishing. The rivers Mistra and Nordre Rena run into Storsjøen, and provide spawning grounds for the fish throughout the entire watershed. Fiskefesten has also cooperated with the Norwegian Institute for Natural research in order to map out developments in the trout population in Storsjøen in connection with the competition.

The competition and event in its’ entirety has been a huge success. A lot of nice fish were reported, including an 84 cm trout from storsjøen and a 79 cm trout from Mistra. Big prizes were dealt out, and good times were had in Rendalen.

Another group of fine fellows, known locally as the “Ditch Otters”, have once again made the pilgrimage Vangrøfta and gave us a quick report of the fishing during their trip. They reported excellent “hatching weather”, but that the hatches never really took off. However, the perfect waterlevels lead to them finding fish now and then. 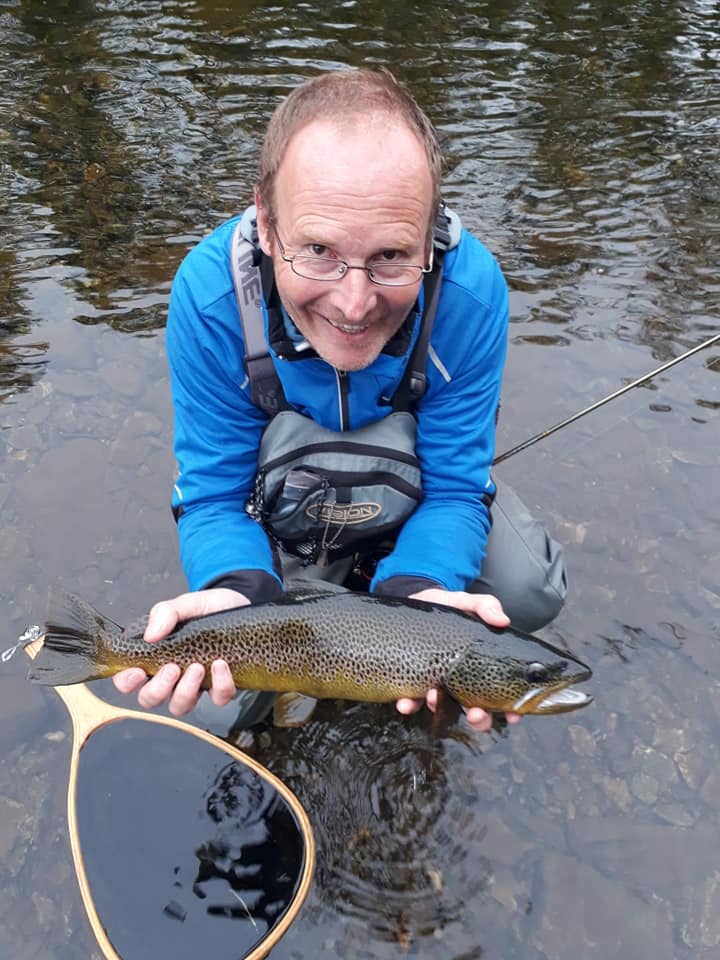 Judging by the photos we don’t think the Ditch Otters have a tough time finding fish in Vangrøfta. 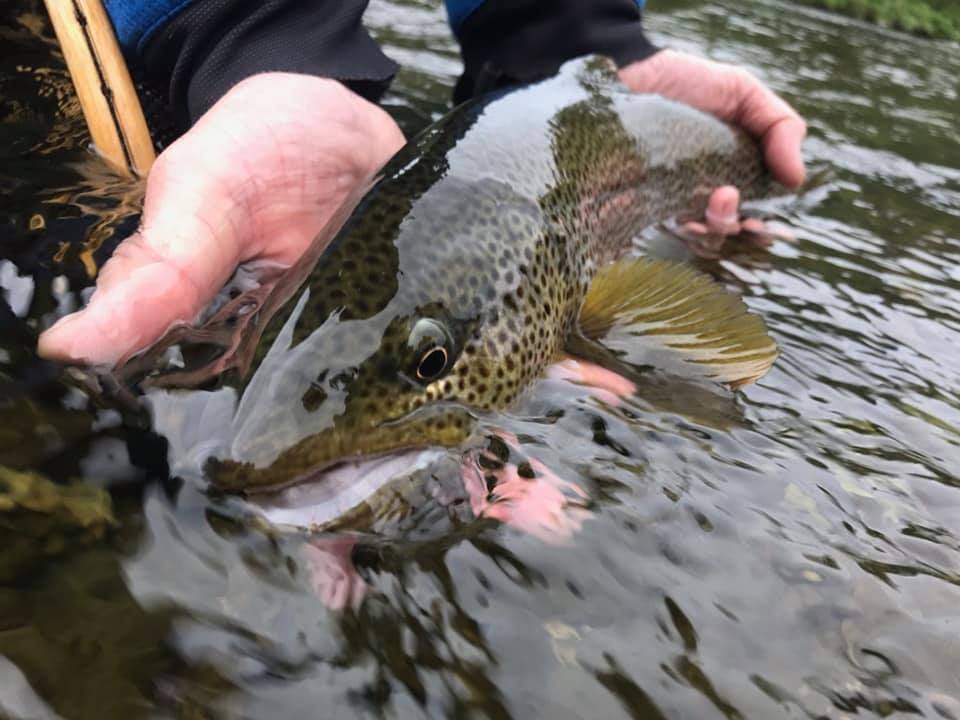 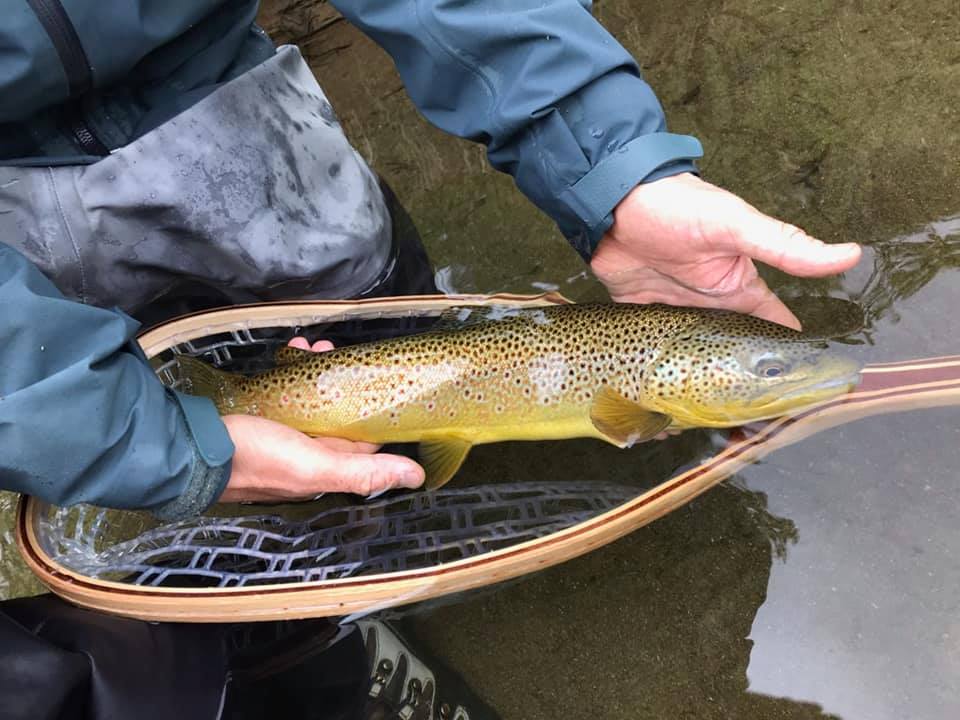 The Truttagutta “The Trout Boys” spent last week in Dalsbygdas hidden gem. They described their experience as such:

“In Vangrøfta you will find a few aurivilli and a decent amount of Baetis. We found some good trout rising but didn’t quite succeed in catching the big ones. The nerves kick in right before they take, and as usual it is just miss, miss, miss, miss, and miss again. However, on the positive side we saw a single Danica.”

And they caught a fish. Photo: Truttagutta.

Not the biggest, but does size really matter? Photo: Truttagutta.

But then things broke loose for the Truttagutta boys in Vongrøfta when the E. Aurivillii began to hatch. This is when its good to be a fly angler!

The Truttagutta explain that on the way to Vangrøfta they made a quick stop in Engerdal and had some fun fishing in the afternoon. The Danica were hatching like crazy, with both emergers and spinners on top of each other. The boys caught some grayling and some nice trout. The water levels were a bit low, but with the rain that came the water levels in Engeråa should be just perfect now.

The Truttagutta had planned to accompany their French friend Francois in Vangrøfta. Unfortunately some bad luck led to his car breaking down in Trysil, where he was stuck for a couple of days. However, the Frenchman didn’t give up. He doesn’t regret anything and is reporting a full on grayling slay fest!

Kjell and Lukas Rakkenes are still on their trip filming for the production of “Ten Rivers Trip”, and they sent us a short report from Trøndelag.

“There has been a lot of wind but its still possible to catch fish in Selbu. You just need to search a bit and be patient. We found a tiny little feeder stream on the river Nea and found a gorgeous trout weighing 1.5 kilos, taken in 80 cm of water”. 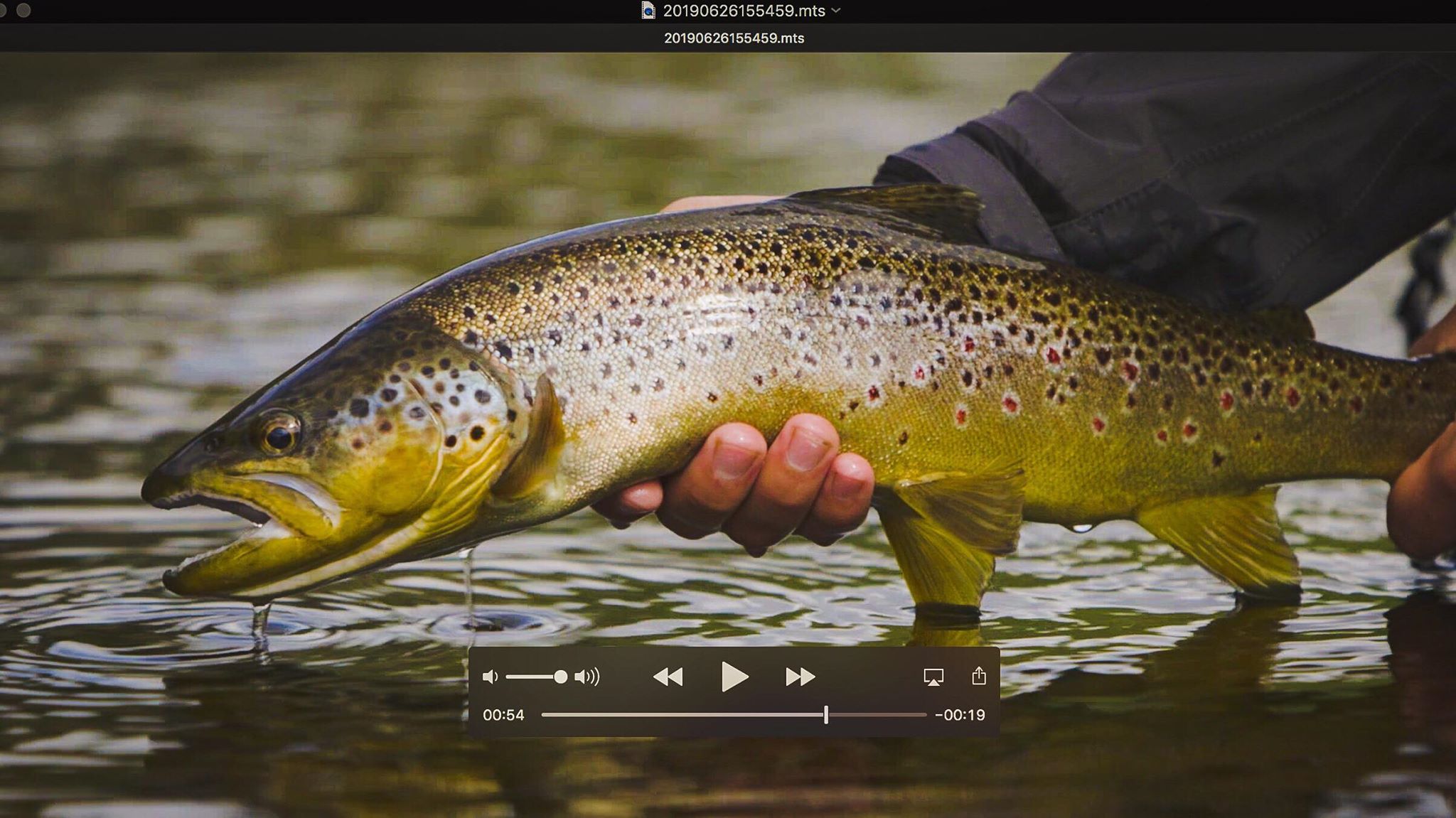 From the Grimsa Flyfishing zone we have received reports of good fishing despite little insect activity and a lot of wind. A detailed report of the fishing here will be following shortly. 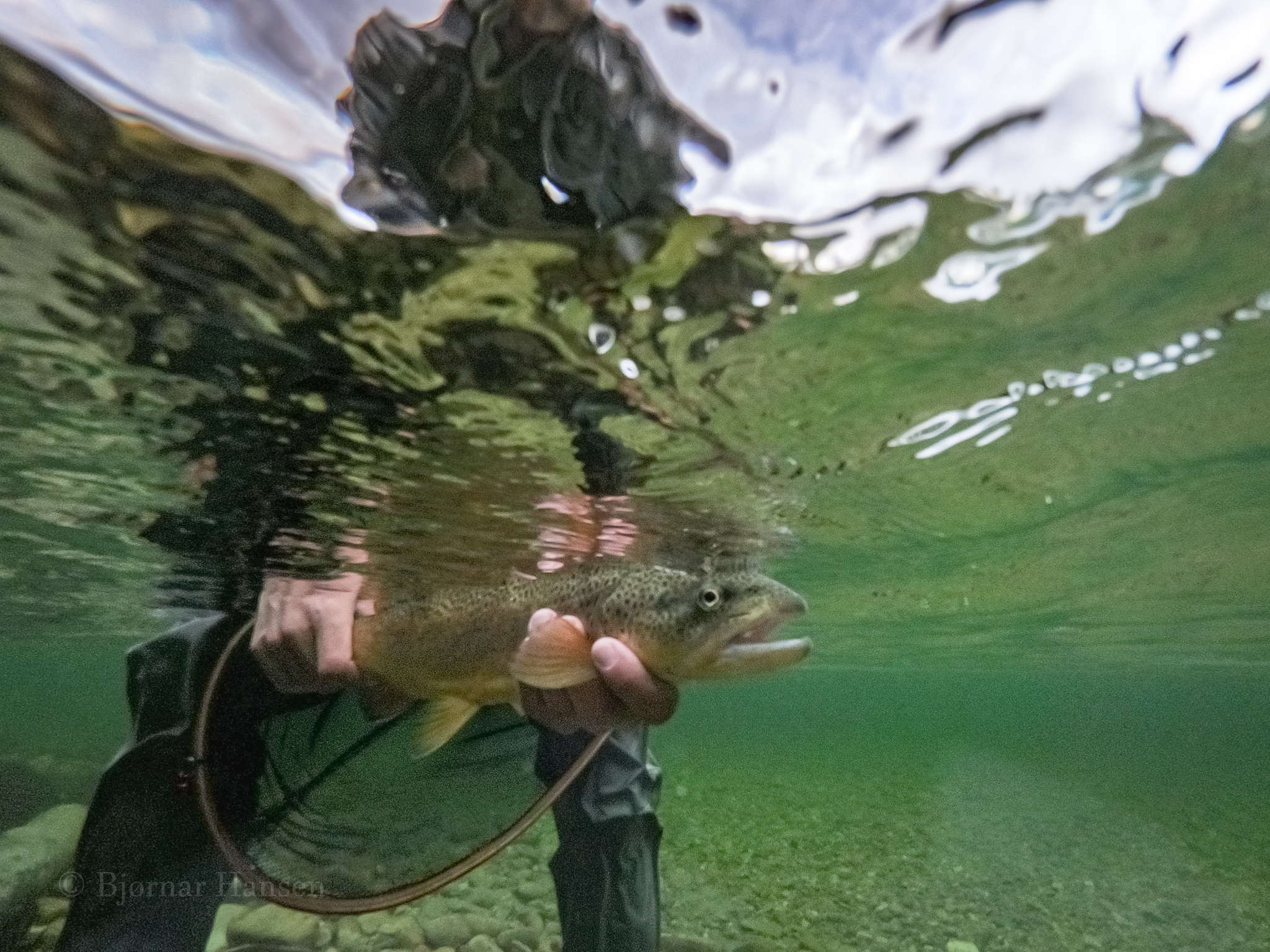