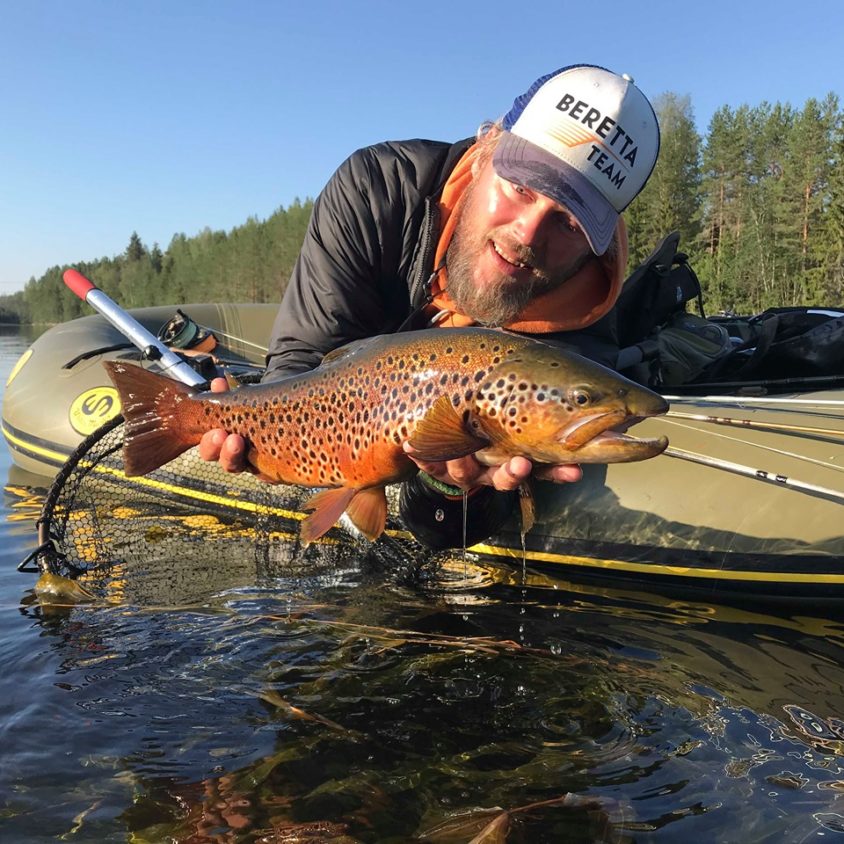 After the previous Rena rendezvous during the opening week in may, a grand plan was hatched for “Tour de Fishspot” with myself (Jake Semons), Anders Dahl Eriksen, Andreas Andersson and friends in […]

After the previous Rena rendezvous during the opening week in may, a grand plan was hatched for “Tour de Fishspot” with myself (Jake Semons), Anders Dahl Eriksen, Andreas Andersson and friends in late July. The plan was simply to have no plan. We would have multiple cars for running shuttles, a plethora of fly rods, lines, flies and gear, the Watermaster rafts, polar bread, and of course tube cheese. Armed with everything we could possibly need to get out and explore, we would figure out where the fishing was good and go there. 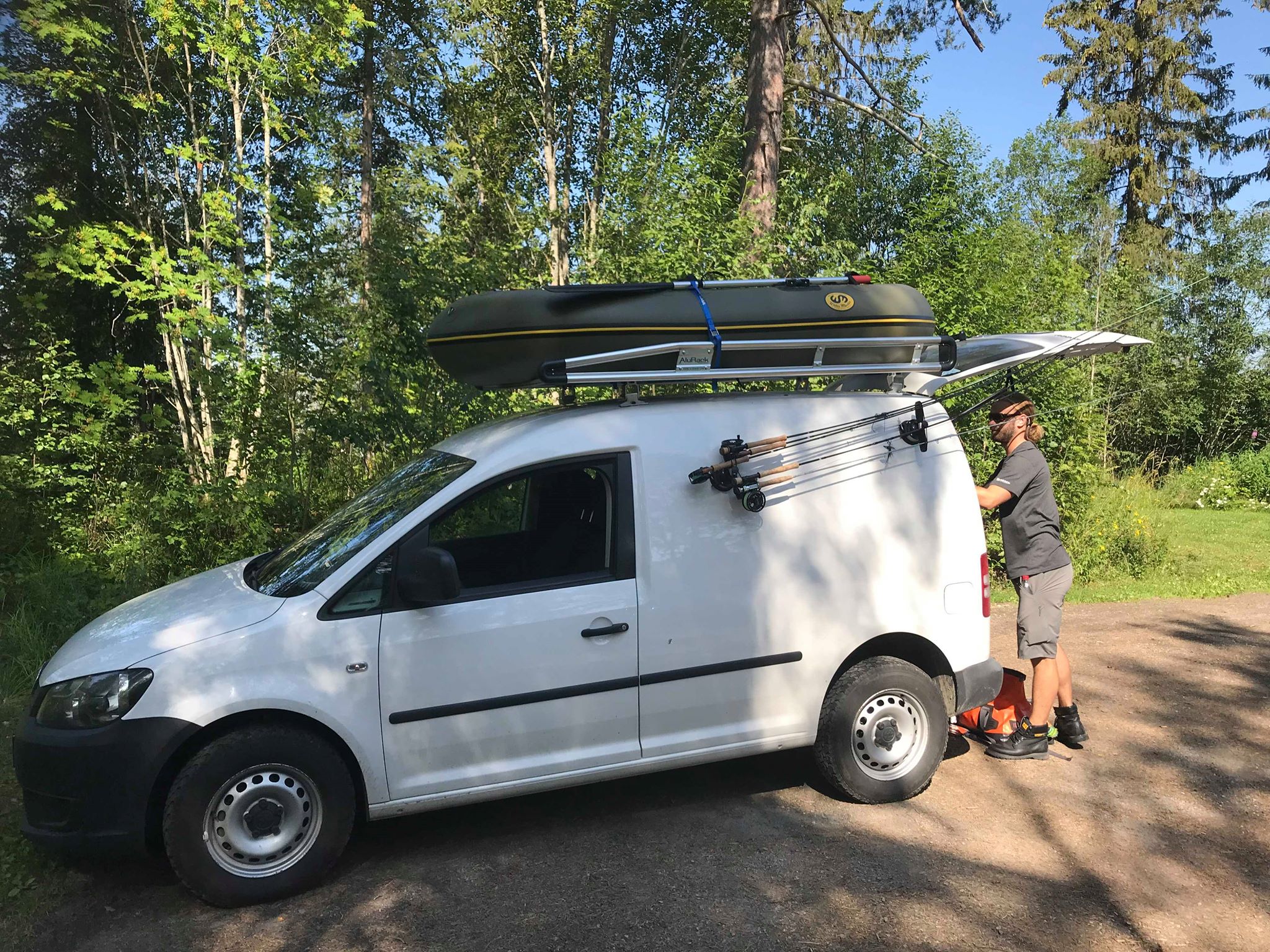 I showed up a couple of days early to do some guided float trips on Rena. The rising was a bit sporadic, so we focused on streamer fishing the first few days and it certainly paid off. The river was low and clear so the trout seemed to like the smaller streamers. We found plenty of solid fish, and day one ended with a bang when a true Rena monster chased down a small streamer right before the takeout on the first day. 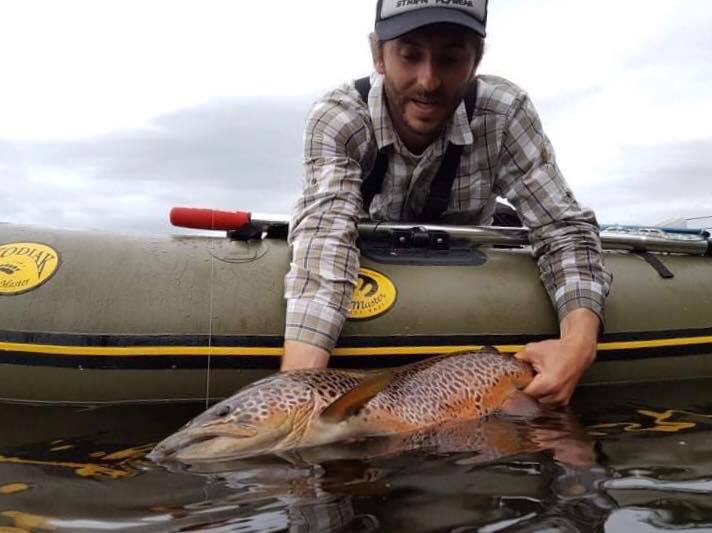 A beast from the depths of Rena. Photo: Martin Holloway.

From here it was onwards to Anders’s cabin in Rendalen. Rain was in the forecast, and we had high hopes for the river Mistra. However, as is typical, the the rain never came. Instead of a flooded Mistra filled with loads of fat trout from Storsjøen we found low water and no fish. We did however get some solid workouts getting in and out of the Mistra river canyon on multiple occasions with nothing to show for it except for sweat drenched waders and a flat tire. 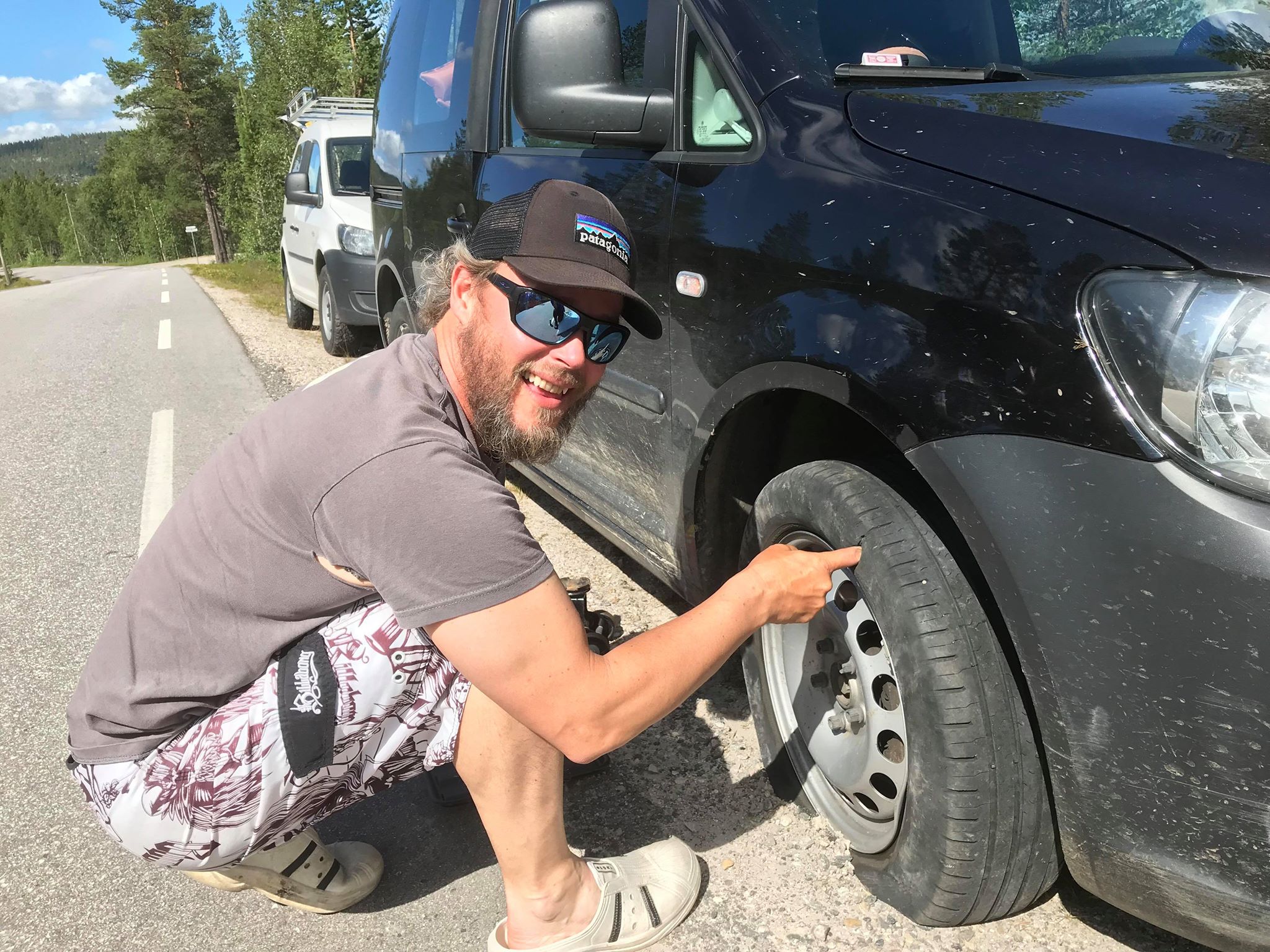 We all agreed that Anders’ tire had a hole in it. Photo: Jake Semons.

We were lucky enough to meet up with local legend Inge Rønning on our last morning in the canyon, and he proved that you don’t actually need water in Mistra to catch fish. Maybe we should just quit with all of this fly-fishing madness and start with Rapalas… Either way it was cool to watch someone who knew the river well and that there really were fish holding in super skinny water. We will see you again Mistra! 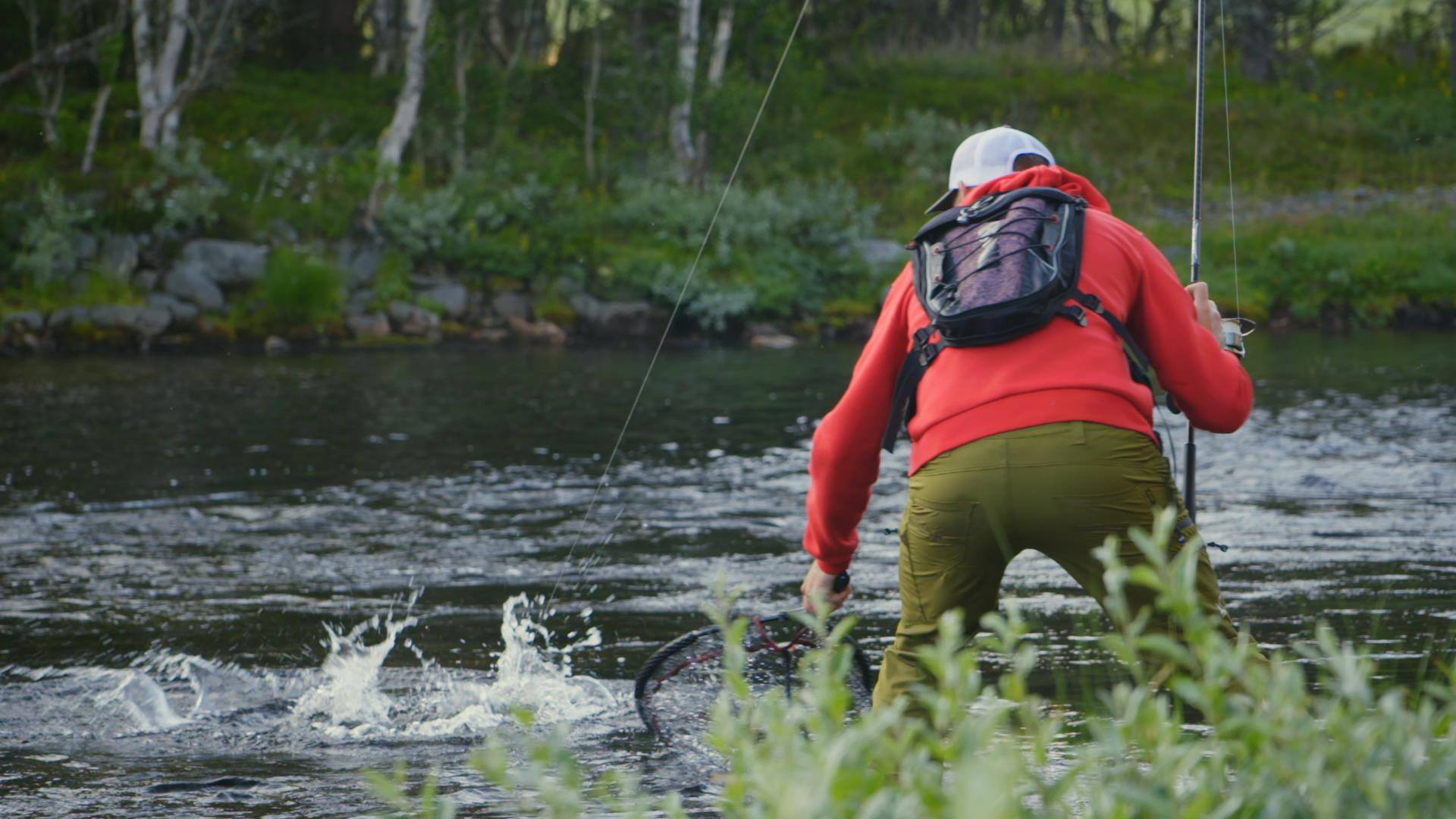 After poking around in the canyon for a couple of days we felt we needed to explore the upper stretches of Mistra. When we arrived at Misterdammen we found low water, but a few big selective rising trout. With no luck on dries we decided to come back and have a go at night with mice. Unfortunately, as we arrived we ran into a squadron of rapala fishermen coming back downstream who had most likely cleaned out the pools we planned to fish, but we committed to the mouse and fished into the morning. 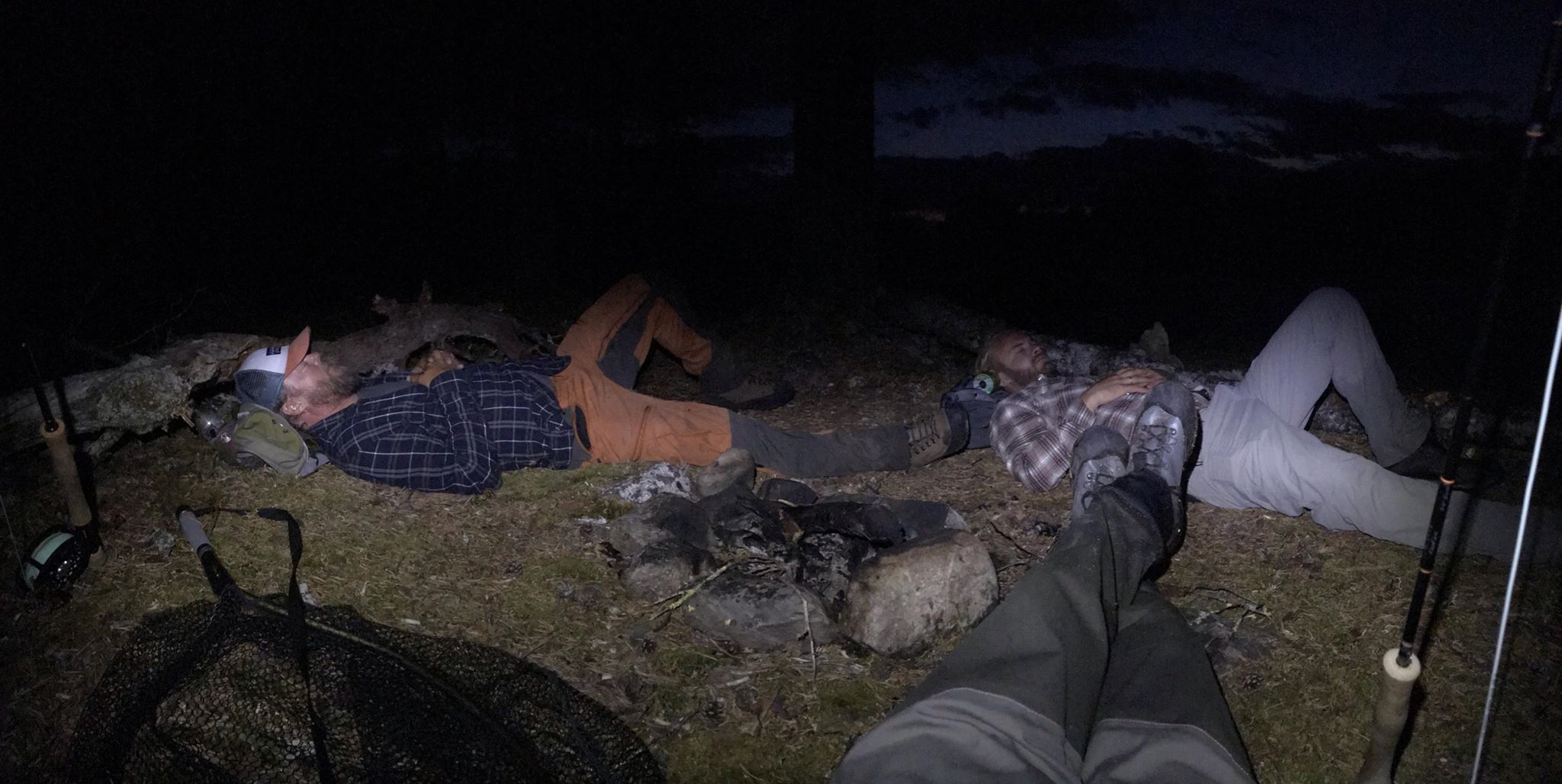 Anders and Andreas having a much-needed powernap on the upper Mistra. Photo: Jake Semons. 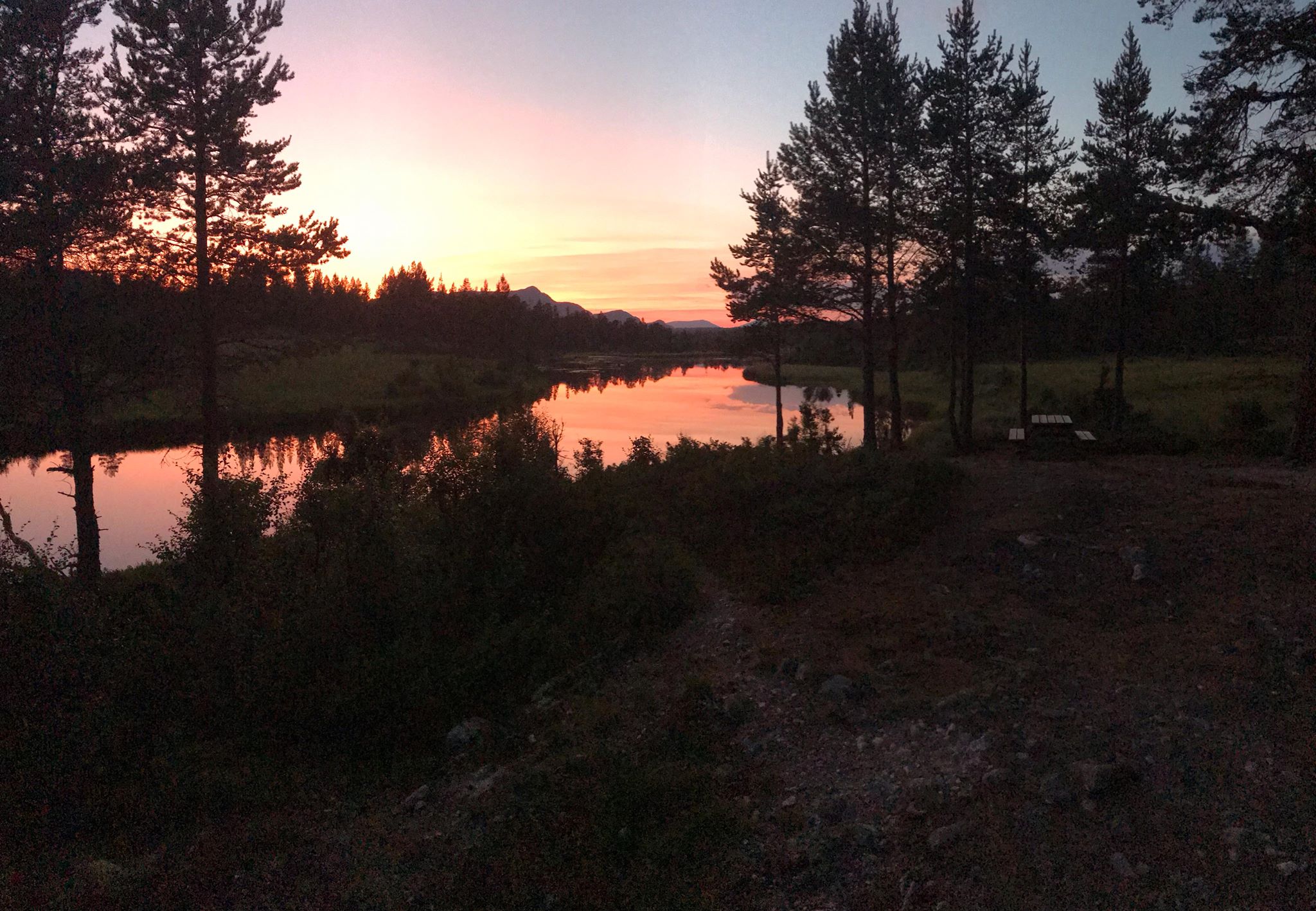 The benefits of sleeping on the riverbank. Photo: Jake Semons.

It was a good thing we slept for a couple of hours that night, because we were scheduled to meet up with fishing guide Chris Hendriks at 9 am the next morning in Trysil for a film shoot. As we rolled into Trysil we were completely exhausted, and when we got out of the car we realized that it was probably going to be the hottest day yet. I also quickly realized that my 5 wt. was still sitting up against a tree next to the parking lot at Misterdammen… Oh well, nothing to do but cross the fingers and hopefully pick it up on the way back. It’s not like we didn’t have enough rods with us!

We proceeded to catch plenty of grayling in the smoldering heat, and were treated to a proper dutch oven cooked lunch on the river bank courtesy of Chris Hendriks. It must be underlined that Chris guides like a true pro! If you are interested in tenkara, or just simply loads of grayling on nymphs and dries, you should definitely look him up. 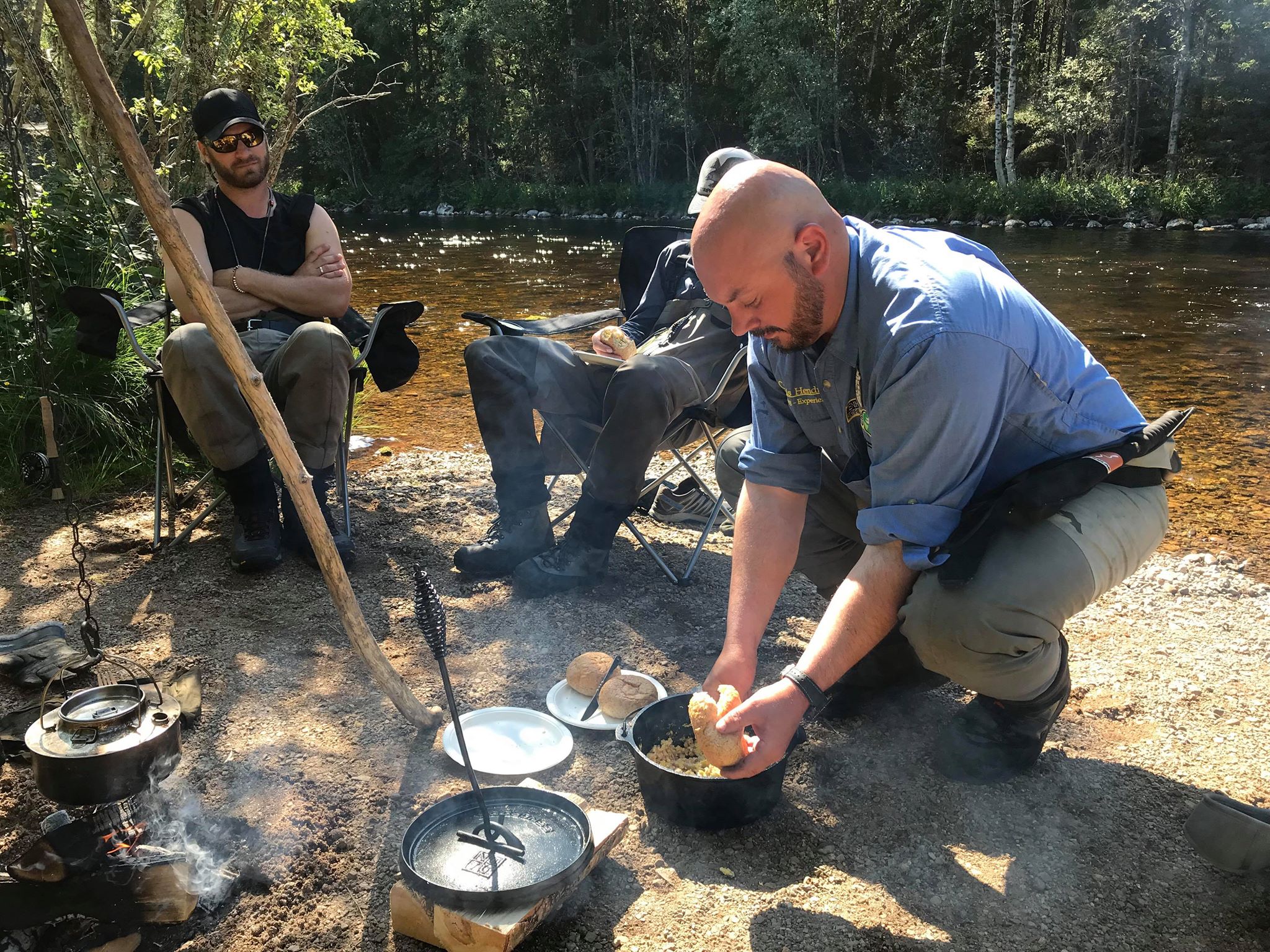 We needed to make one more stop at the delta just above the city center in Trysil to get a couple more shots. As we rolled up we were very intrigued by this zone and right away we saw several steadily rising fish. A couple of grayling later and suddenly I hear Andreas yell out “Fish! It’s big! I think it’s a trout!”

As it turns out the Swedish streamer master has a soft spot for dry fly fishing. But who doesn’t like big trout on top? Especially when you are skating a caddis over the very bottom of a tail out in less than a foot of water! I grabbed the net and ran downstream. After chasing this fish around in the shallows for a several minutes and a spirited attempt to exit the net, we had landed a proper Trysilelva trout. 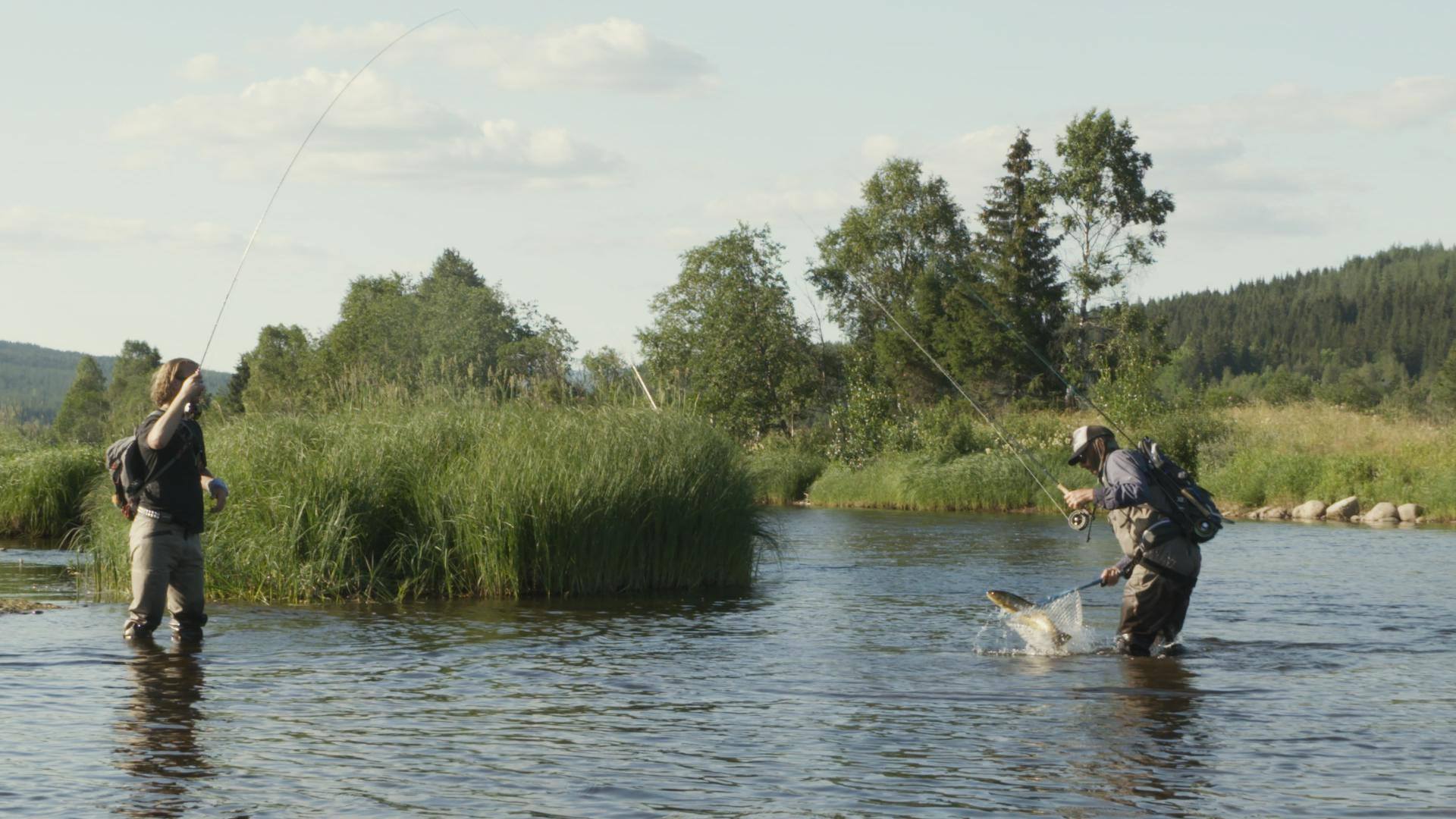 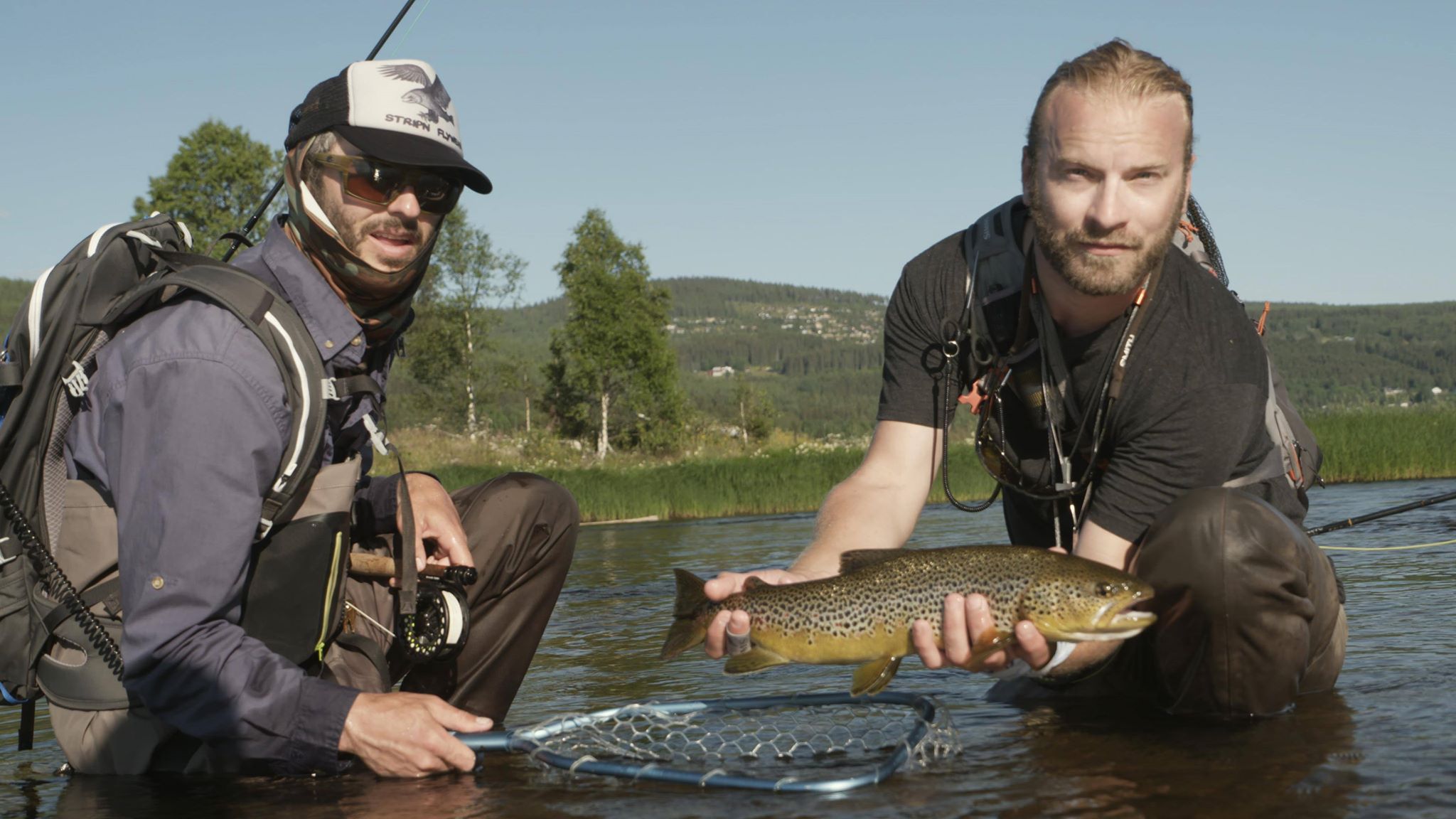 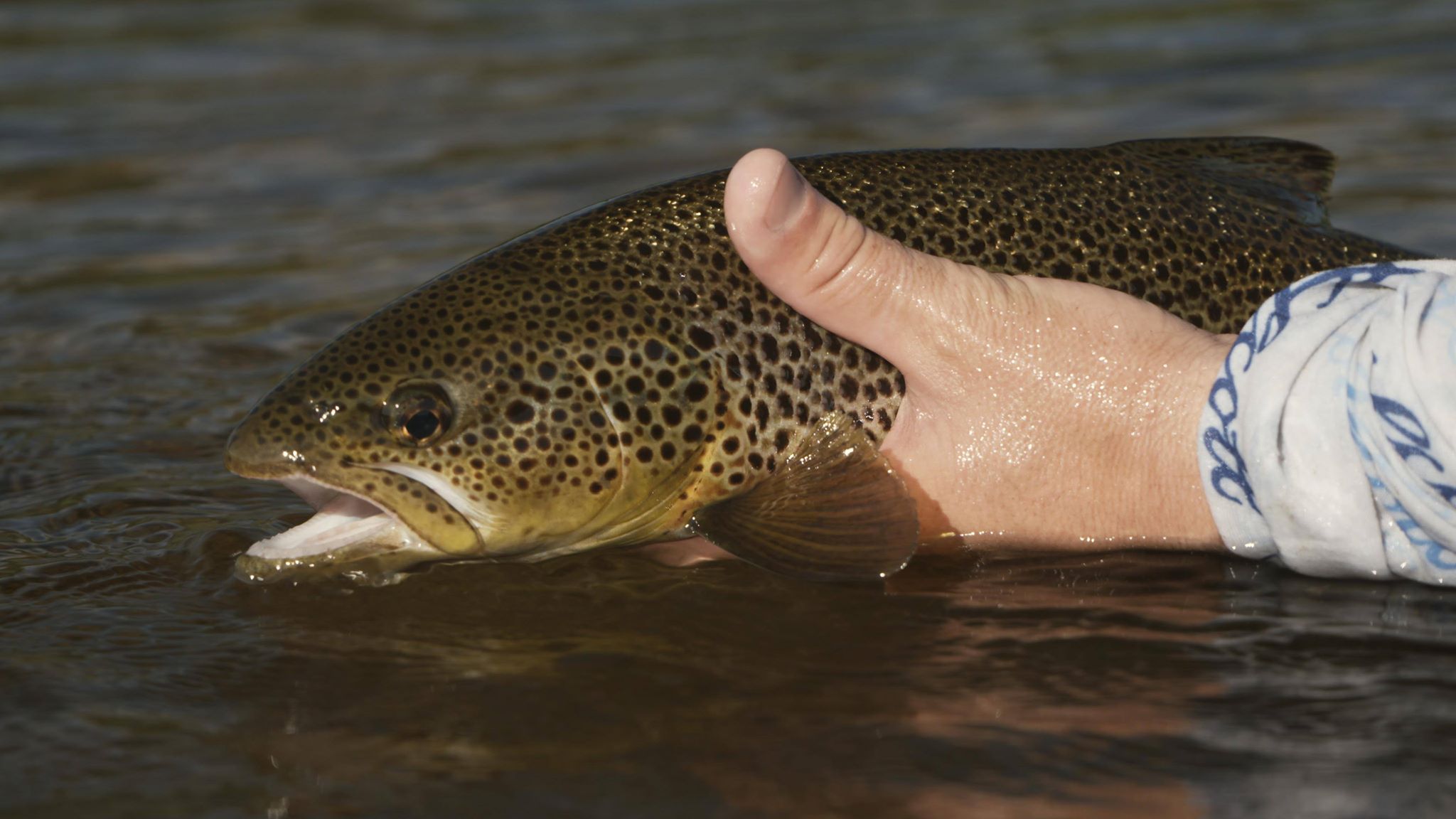 After a full night of fishing and a long hot day on Trysil we had only one night left of fishing, and we were not going to waste it on sleep! We packed up and hit the road for Rena. I even found my rod on the way back exactly where I left it. Thanks to all you Norwegians for being so honest! We got to Rena just before dark, set up the boats and hit the river. 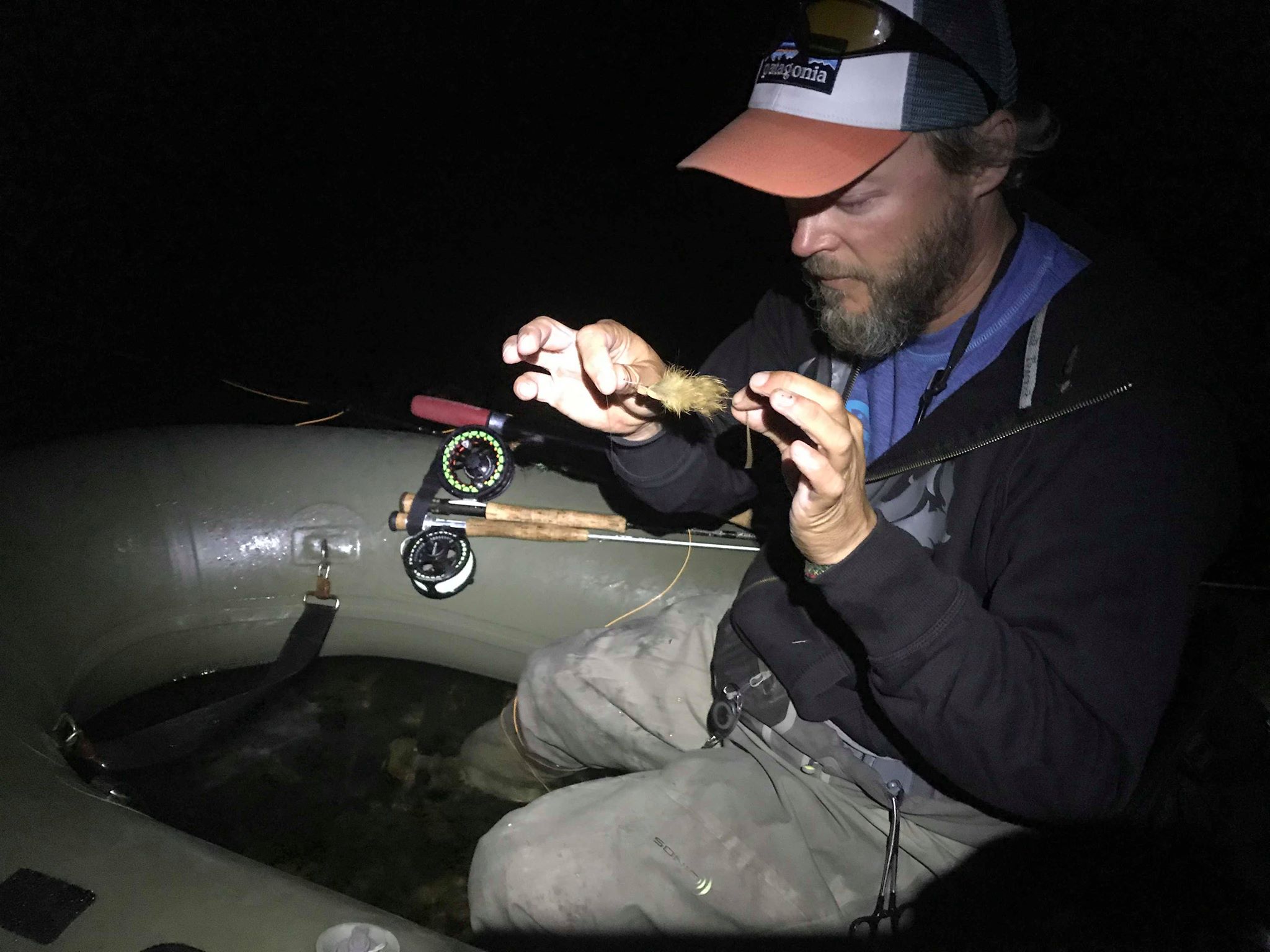 Anders is now a believer in the mouse. Photo: Jake Semons.

A couple of trout fell victim to the mouse that night, and many more exploded on it. The key to mouse fishing is to resist the temptation to “trout set” when you hear them explode on it, and keep on stripping until they eat. They will often roll on a mouse multiple times before they get actually get ahold of it.

The river had dropped substantially over the past several days and it was tricky reading the river as the flows and channels changed each day. This time we found fish in the deeper water on heavy sink lines, and Anders was rewarded for stripping a big ragdolly over some deep water structure mid river. 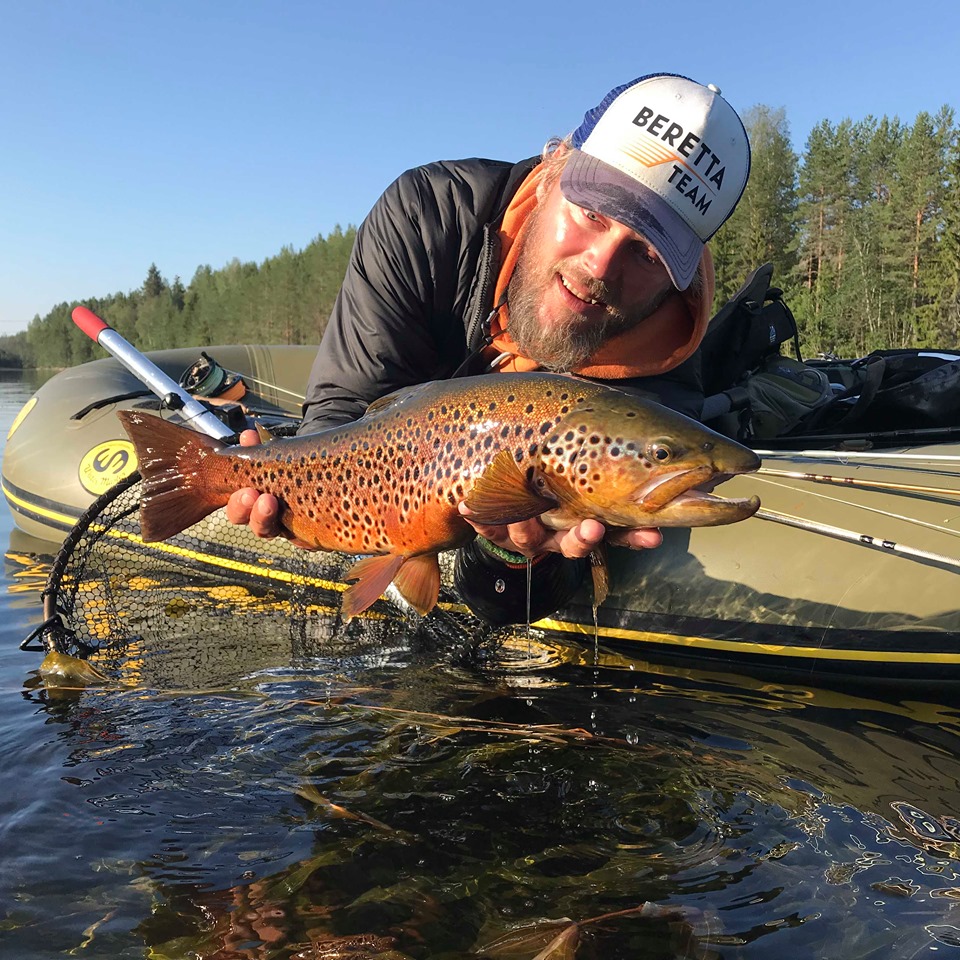 Thank you for this time around fishspot! The water was low, the heat brutal, the beer warm, the sleep minimal, and the fish big. We’ll see you next time! 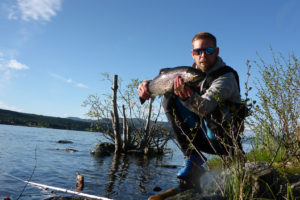 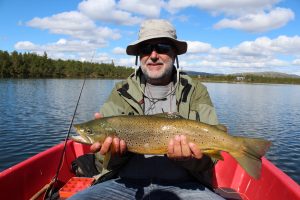 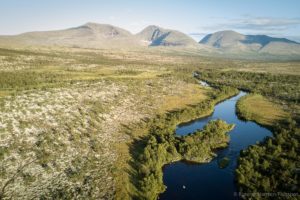 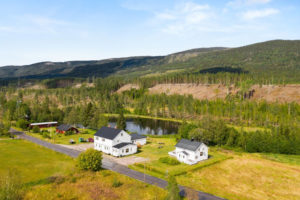 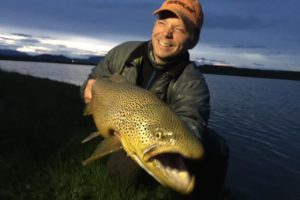 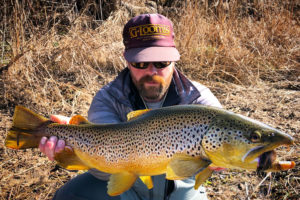 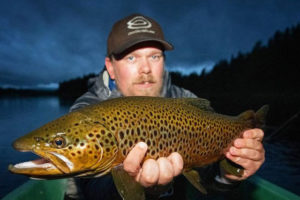