Tya was closed for fishing this May, after a long period of over harvesting. Last week, researchers underwent a fish count on the river. The results were simply depressing.

Last week, researchers underwent a fish count on the river Tya. The results were simply depressing.

Tya was closed for fishing this May, after a long period of over harvesting. Later this summer, a short stretch of river between Løvøya and up to Esfossen, was opened for catch and release fishing only in order to sustain activity on the river. Ole Kristian Berggård, who manages this stretch of river, hopes to restore Tya to an attractive trout stream.

Last week he, Emil Jamtfall, and Ragnar Dahle from Scandinavian Nature Observation underwent a fish count on Tya in order to estimate the current trout population.

– The plan is to undergo yearly counts, so that we can better understand the population situation, explains Berggård.

With almost perfect conditions, with low and clear water, the divers had 7-8 meters of visibility. They drifted downstream holding a short distance between each other. They tallied the total amount of fish in each pool visually.

– Fish are only found in one third of the river. On the straight sections we are able to count virtually everything, but throughout the wider slower flowing sections of river, such as Håen, it is difficult to get an exact count. Therefore this section isn’t included in the results, explains Emil Jamtfall.

The result halfway through the count was very depressing. Only 9 trout, and one wobbler. Four hours later the results were no more inspiring, and there were in total counted 41 fish in 2 km of river.

– This is a frighteningly low count. I could not have imagined that the results would be so low, says Ole Kristian Berggård.

– Even though we estimate we could have undercounted by roughly 20%, the situation is still critical. What is frightening is that we counted so few young fish. Typically this is what we see most of during this type of fish count. It is difficult to conclude why this is the case, but regardless the results of this count show an unhealthy population of trout in Tya.

For comparison, a similar fish count undertaken 10 years prior revealed a population of 300-400 fish throughout the same stretch of river. Even though there were a few very large fish observed, there should always be more small fish than large fish in any healthy watershed, explains Berggård.

– This shows that the river has very low recruitment, and that there may be no harvesting of fish in the near future. We do however believe it is very important to have anglers on the river, being that this is the best type of supervision possible. We are now putting together a report, and are considering various regulations as we learn more. We truly hope to restore the river Tya to its’ former glory! 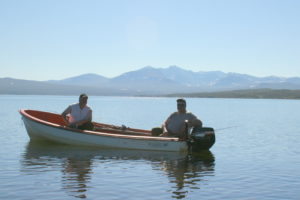